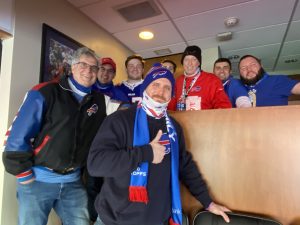 Logistics Plus founder & CEO Jim Berlin was interviewed by Erie News Now to talk about his lifelong support and excitement for the Buffalo Bills.  Jim’s support of the Bills dates back to 1969 when he attended college at the University of Buffalo. Just two weeks ago, Jim was one of the lucky fans who got to attend the first Bills home playoff game since 1996 versus the Colts. This week, Jim’s even more excited as he secured his tickets for the AFC Championship game versus the Kansas City Chiefs.

“If you watch the game, on the 25-yard line, there will be four of us in blue,” Jim told Erie News Now. When asked about the favorite teams of his employees, Jim adds, “When you walk through Union Station there’s all sorts of Steelers and Browns paraphernalia. There’s only like four or five Bills fans but we’re walking the halls proud this year.”

If the Bills move on to the Super Bowl in Tampa Bay, you better believe Jim will be searching for his next set of tickets.

Watch the full news story below or using this link: www.erienewsnow.com/jim-berlin-says-buffalo-may-go-all-the-way