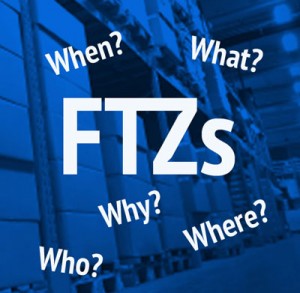 What are Foreign Trade Zones?

A Foreign Trade Zone (FTZ) is a secured area, where both domestic and foreign commercial goods receive the same treatment by U.S. Customs and Border Protection as if it were outside the commerce of the United States. This means that merchandise may enter Foreign Trade Zones without a formal customs entry and payment of customs duties.

During the Great Depression, the U.S. Foreign Trade Zones Act of 1934 created the FTZ program in attempts to expedite and encourage foreign commerce, and reduce costs for U.S.-based operations engaged in international trade.

FTZs are generally located in an area in or adjacent to a United States port of entry, where they are supervised by U.S. Customs and Border Protection. Every state currently maintains at least one FTZ, and some have many more. Today, there are more than 230 general purpose FTZs (those available to more than one company), and nearly 400 subzones (those designated for one company only), that operate in the United States.

Why should you use FTZs?

There are benefits to using Foreign Trade Zones, which include:

Who should you contact to find out more about FTZs?

Logistics Plus has an activated general-purpose FTZ in Erie, PA, and a soon-to-be-activated FTZ in Dallas/Fort Worth, TX. If you have questions or would like to learn more about Foreign Trade Zones, feel free to contact either of these Logistics Plus FTZ experts: