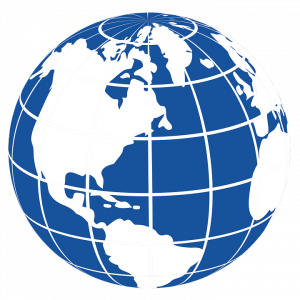 The United States International Trade Commission (USITC) just released its annual “The Year in Trade” report for 2018. This detailed report features all of the global trade trends from 2018. Some of the key elements to this report are exchange rate trends, administration of U.S. trade laws, global trade agreements, new trade relations, and global economic trends, among others. Highlighted below are a few of the trade trends we saw in 2018.

Trade Activities With Major Trading Partners
The European Union as a single entity continued to be the United States’ largest trading partner in 2018. The EU member countries accounted for 6 of the top 15 U.S. trading partners. Leading U.S. exports to the EU included civilian aircraft, engines, and crude petroleum. After the EU, China remained the United States’ largest single-country trading partner, accounting for 15.7% of total U.S. merchandise trade. Leading U.S. imports from China in 2018 were cellphones, computers and tablets, and computer parts. Canada remained third on the list and accounted for 14.7% of total U.S. merchandise trade. 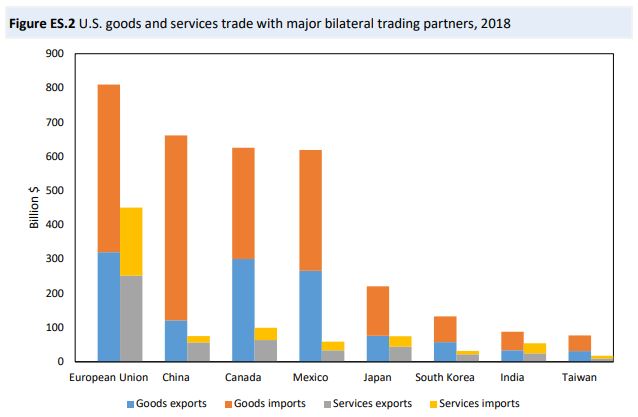 In 2018, Canada was the United States’ second-largest single-country trading partner after China for the fourth consecutive year. The value of U.S. two-way merchandise trade with Canada rose 6.1 percent to $617.1 billion in 2018, accounting for 14.7 percent of total U.S. merchandise trade with the world. Both U.S. merchandise exports and imports with Canada increased in 2018 from the previous year, but imports outpaced exports, resulting in a $2.6 billion increase (15.8 percent) in the U.S. merchandise trade deficit with Canada to $19.7 billion. Leading U.S. exports to Canada included crude petroleum; civilian aircraft, engines, and parts; motor vehicles—both for passengers and for goods transport—as well as their parts and accessories; and light oils. Top U.S. imports from Canada included crude petroleum; passenger motor vehicles and their parts and accessories; refined petroleum products; natural gas; and coniferous wood and products.

Global Economic Trends
Overall, the global economic growth rate fell slightly from 3.8% in 2017 to 3.6% in 2018. The slow global growth seen in 2018 is attributed to short-term uncertainty in economies due to trade tensions and financial pressures in emerging markets. The United States was the only economy to show improvement in it’s growth rate from 2017 to 2018. 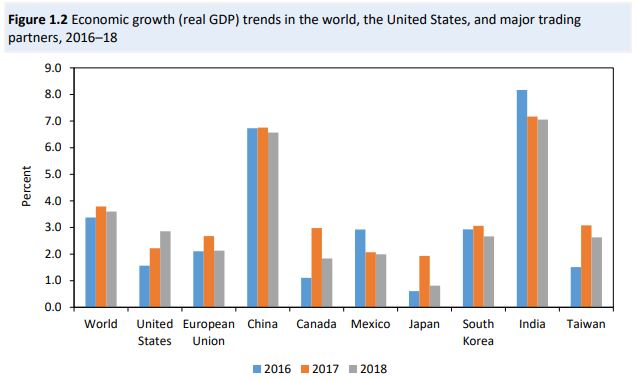 U.S. Dollar Exchange Rate Trends
The U.S. dollar appreciated in comparison to other currencies, rising 5.5% between January and December 2018. The previous year, the U.S. dollar depreciated by 6.3%. The upwards trend in 2018 was driven partly by the Federal Open Market Committee’s four interest rate hikes, along with a lower than expected unemployment rate. 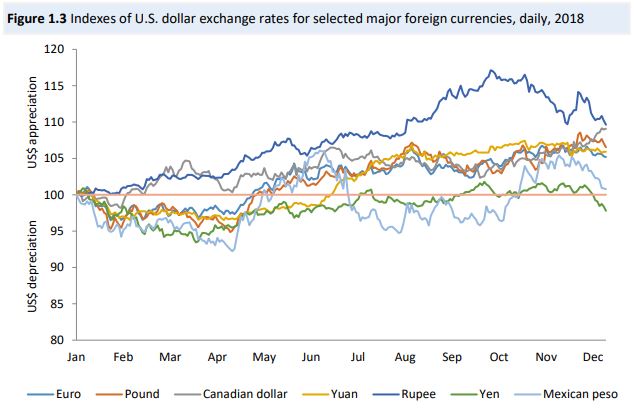 To read the full report, The Year in Trade 2018, published by the United States International Trade Commission, click here.

If your company has import or export needs, you should consider working with Logistics Plus. Global trade compliance management is as important as it has ever been. In the U.S. Logistics Plus more than a dozen locations that can help you with your transportation and logistics needs; and our Customs Brokerage staff can also help you clear customs for imports at any port in the United States. Additionally, Logistics Plus now has locations at 50 offices in over 20 countries. As always, you can find any of our worldwide employees in our online global directory.